How IT Support Has Changed Over the Years [Evolution]?
Skip to content

How IT Support Has Changed Over the Years [Evolution]? 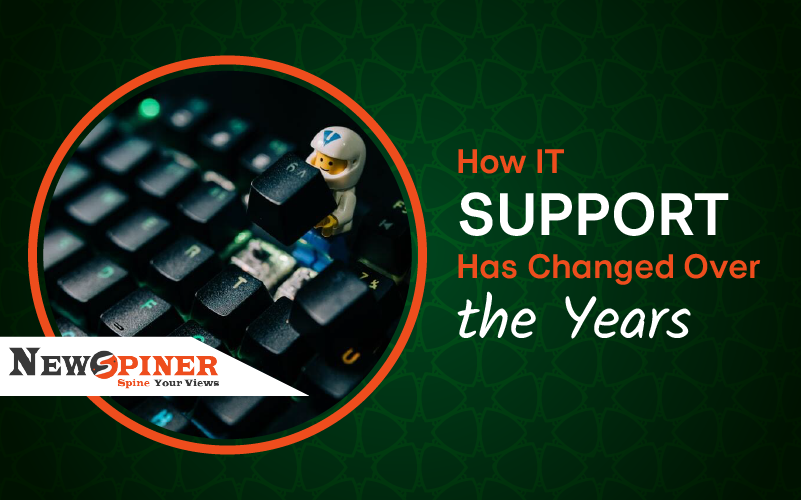 For many years, information technology (IT) has been regarded as the hub of all technological innovations within organizations. The IT department of any organization has become an essential part of operations today, given that the world of business is heavily dependent on technology.

Today, technology is no longer limited to or solely controlled by IT departments. Cloud computing and mobile devices make it possible for anyone to access high-quality tech that would otherwise have been restricted to IT personnel or at the very least confined to the department.

It appears that IT support is being replaced by the technology that created them in the first place. That’s what’s happening, but is it really what’s going on? If there is a future for IT support, what does it look like?

To get a better understanding of what IT support will become in the future, it’s important to understand what the term means and examine the journey it’s taken to get here.

Why do we need information technology?

In the business world of today, computer networks are commonly referred to as “IT.”. It refers to their usage in the following areas: modifying, storing, retrieving, transferring, processing, sharing, analyzing, and protecting all information and data in a digital form. In addition to mainstream TV and telecommunications, IT can also include operating systems, catalogs, e-commerce, and websites as a whole.

It can be quite challenging to deal with such matters by yourself, so you may need to hire an experienced IT support company to handle the technical side of things. There is no shortage of companies that you can work with if you conduct an online search.

Consider hiring an experienced IT support technician from an established platform like fieldengineer.com rather than learning on the job. Your investment will yield excellent results and you will know that it has been well spent.

The Evolution of Information Technology Support

The tech support industry has changed a lot in the past decades. During the time covered in this section, IT support was growing and developing.

In this period, data storage and computing became increasingly popular. The primary task of technical support in this period was to develop and maintain hardware. What do you remember about mainframes and IBM? This is the period during which they lived.

Back then, computers were not as easy to use as they are today. Yet, it was most likely to make errors because it was able to fill the room and needed someone with high specialization to function. Because of the many accessibility barriers, the technology was only available to a select few.

In the past, many improvements had been made to increase computer accessibility for the general public, but even this accessibility was limited. In most cases, the technology was still out of reach for the average person. It cost about $1,500 to purchase a single Seagate hard drive with five megabytes of memory.

Though usage of the technology had increased, connecting the users’ desktops to a single mainframe became more complex as a result. Using a report, for example, might seem like an easy task today, yet it went through so many complicated steps? Although this occurred, technical support and information technology improved significantly during the period.

It was during this decade that things began to shape up in the IT industry. Computer technologies have undergone and are still undergoing significant developments. Today, most office workers have access to the internet and an e-mail account, as well as a computer. IT support has been in demand at an unprecedented rate since then. As a result, companies that are unable to meet the demand internally began to build call centers and outsource their technical support.

Since the technology had been dispersed so widely, almost everyone had a question that needed to be answered by tech support at some point. The data itself was handled by a small team whereas the hardware was serviced by a larger team.

In most cases, the tools needed to resolve an issue were already part of the software, but the hard part was providing technical support on a much larger scale without becoming overwhelmed.

A business’s profitability can rise by nearly 120% by retaining just 5% of its customers. In addition to drastic losses, poor customer service leads to low customer satisfaction.

It was during this time that technology support became more important, especially since communication technologies and techniques had become more accessible in general.

Providing support to clients is a continuous process in which software companies strive for faster response times and greater efficiency. Below is a list of some of the things that have changed over the past decade in IT support:

The break-fix model is one of the oldest methods of providing IT support to clients. To perform this task, the IT team has to wait for something to break down and then analyze all possible hypotheses to determine what the problem is.

It is usually done by listing all the possible causes for the breakdown and testing each one to determine if it is the reason. Elimination is the key to diagnosis.

It is possible to find the causes by knowing everything that can go wrong and the tests you can run to determine whether each component works. Tests are conducted until you find out what isn’t working.

In the world of information technology, the possibilities are endless and this method would be ideal if it weren’t for the fact that the options are endless. Everything becomes even more complex as a result.

By utilizing the Break-Fix Dispatch Services of ExterNetworks, you can provide your employees with 24/7 direct hardware support, as well as complete IT network support. For organizations without dedicated IT staff or with limited IT resources, this IT Support Service model is ideal.