How Do We Celebrate Republic Day?
Skip to content

How Do We Celebrate Republic Day? 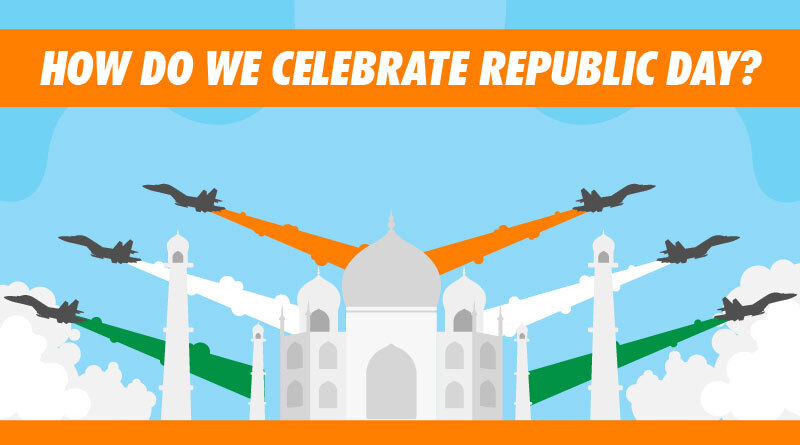 As we all know that Republic day is a remarkable day in the history of India. This was the day when finally the constitution of India came into effect on January 26, 1950. In this celebration, a march past by various wings has been the hallmark of the Republic day Parade at Rajpath!

This day is celebrated in the honor of date when the constitution of India came into effect. On this day the country’s transformation towards becoming independent had begun.

It has been 72 years now since India has been a republic. It’s the moment of pride that our country has made a remarkable mark on the global map. Today India has excelled in both the technological and economical aspects as well.

In India where 70% of its population is young, for the youth it becomes a day of utmost importance and can be witnessed in various schools and colleges. It is otherwise declared as National Holiday, a Republic day is celebrated with great enthusiasm in every university, school, and college. It is a matter of pride to be chosen for the Republic Day Parade or some cultural items at your school.

How Republic Day is celebrated in Schools and Colleges?

On this day, the entire school or college is asked to come in the formal dress codes. Once everyone gathers a huge and warm welcome is delivered by all the respected founders and principles. Then they will introduce the chief guests and give a brief about his/ her achievements. They started welcoming the distinguished guests, teachers, and parents and talks about their notable achievements. After that, the Chief Guest is asked to stand as the students and start displaying the march past in their best form.

Both the chief guest and principles of the university deliver the speeches to inform the students what they are capable of and how they can take inspiration from the great achievers who have made India proud at the global level.

Most of the individuals perform various cultural activities to entertain the guests. All their performance pays tribute to the country’s achievements and the achievers. Some perform Indian Classical dance, acrobats, drills, and other activities.

On this day you can sing National Anthem and don’t forget to stand up when it is played either on the new screen or standing on a Parade ground. You can also visit your nearest public building and experience the feeling of moving our National Flag.

All these are been displayed to showcase the skills that are honing in its students. The prizes are given away by the chief guest at the end of the day for the enthusiastic students on a happy note.

On this beautiful day, you can go all patriotic and watch movies like LOC, Border, etc. And even you don’t need to download a movie online as lots of channels will already air the patriotic movies on the 26th of Jan.

7: Speak Hindi on This Day:

Make a habit on this day to speak only in Hindi. The irony in our country is for those who are not well-reversed in English and looking at those who don’t know Hindi. Here the question has been arising that why people are not more particular about our mother language like the French.
One should know that English are good for them but our mother language should need to be spoken as well. Still, various people believe that Hindi is equally important as MATRA-bhasha.

8: Become a Tourist in Your City:

On Republic day you need to stay in your station rather than wondering about the other places. You don’t need to spend your money and enjoy yourself in another country. The idea of becoming a tourist in your city might sound great. It provides an excellent way to unwind. On this day you can visit forts, monuments in your city and almost in every city town.

Today India is all set to celebrate its 71st Republic day on 26th January. This event is marked by the president’s speech, power parade, and exhibition of military power, traditional performances, and performing some other activities in New Delhi.

As mentioned above Republic day is celebrated as one of the national holidays in the country. It has a great significance as of Jan 26, 1950. It was the day when the constitution of India came into effect and makes the country sovereign, secular, and democratic. The Republic day represents our constitution and we as Indians feel much pride to be born in India.

1: On Republic day 1950 Doctor Rajendra Prasad has been elected as the first President of India. He replaces the governor-general of India head of state.

2: When India became a republic country, then it was the first country within the Commonwealth of Nations to do so.

5: However, the first Republic Day Parade was held in 1950, Rajpath. But also it didn’t become the parade’s permanent until 1955. Before then the parade was been held at Irwin Stadium, Red Fort.

6: The Royal Prefix has been dropped from the Indian Air Force on Republic day in 1950.

7: More than 100 aircraft have participated in the first parade and nowadays it has been decreased to just over 30.

8: The Royal prefix was dropped from the Indian Air force on Republic day in 1950. More than 100 aircraft participated in its first parade. But nowadays its number has been decreased to just over 30.

9: Our country India adopted its national animal, the lion head from Ashoka Pillar on this day.

10: The peacock was subsequently declared as the national bird on Republic day 1963.

Republic Day is a Dry day

Those who would like to have an alcoholic toast to celebrate Republic Day should note that it is a dry day across India. It means that all the shops, bars, and even the five-star hotels won’t sell the alcohol. But on the other end, it is quite disappointing that some places sell alcohol on Republic day like Goa.

How to Celebrate Valentine’s Day

How to Celebrate International Women’s Day at work