Why do we celebrate Karwa Chauth? | Newspiner
Skip to content

Why we celebrate Karwachauth in India? 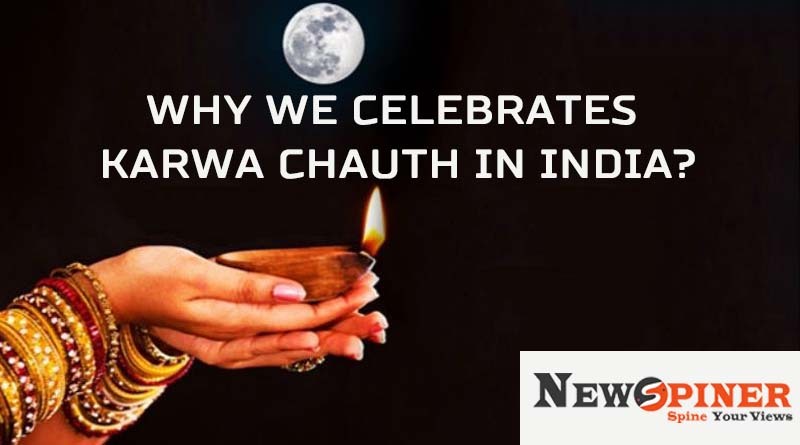 The festivals form the essence of life and it becomes very interesting to see how every occasion is celebrated with great joyfulness. It’s quite obvious when you will find the woman on shopping markets, bustling with mehndi and on bangle stalls.

Well, it’s not over yet you will find the woman from beautiful accessories and dresses her in a way that she looks more glamorous. Thus, when the karwachauth is around the corner then it’s the time to bring preparations for this grand festival.

Karwachauth is a promising occasion in which the married women pray to Lord Shiva and Goddess Parvati for the long-life of their husbands. The woman dresses up in ethnic wear and applies sindoor and jewelry. And before the sunset, they come together in a group and read the vrat, Katha.

It has also been said that unmarried women can also celebrate this festival for their grooms and with the great immense. The woman who observed all the fast prayers to Lord Shiva, Goddess Parvati, and Lord Kartik would be more blessed with a blissful life.

The most popular story that is associated with Karwachauth is about Savitri Devi. It was believed when Savitri husband Satyavan has passed away she was determinant to bring him back to life. She appealed to Yama (The lord of death) to grant his life back but when it didn’t work, she stopped eating and drinking. The Yama asked Savitri to ask him for some other with rather than granting her husband’s life back.

Savitri agreed and then asked Yama to bless her with children. Yama approved her wish but Savitri protested that she cannot have children with any other man other than her husband. Thus, having no choice Yama had to bring her husband’s life back.

Therefore, women on this day fast for their husbands with the faith that they extend the life of a husband. On this day the woman gives up their eating and drinking the water throughout the day. The reason behind the fast is broken after the moon comes is the woman pray just like the moon to shine their husband’s life bright.

How the day is celebrated?

On this day the married woman wakes up early in the morning and eats Sargi. It’s a meal that is prepared by their mothers-in-law. As the Sun rises the woman needs to stay away from food and water and fast the whole day until they spot the moon in the evening. After the prayers, and once the moon have been spotted, they offer water and seek blessings.

According to the rituals, the husbands offer their wives food and water and break their fast. The woman wore the traditional beautiful attires and sings religious songs and also exchanges Karwas.

Some Rituals of Karwachauth:

1: Sargi: Though, the women fast on this day, so the food becomes an important part of this day. The practice of eating Sargi in the early morning is important. It’s usually a common practice for mothers-in-law and prepares a thali full of sargi for their daughters-in-law.
The Thali comprises the food that provides enough energy for the long day ahead. Some of the common sweets have been prepared for the Sargi like Halwa and Phirni. There are also some dry fruits like almonds, cashews, walnuts, etc. All these are consumed because they contain a high amount of nutritional energy. The fruits are also important since they provide the body much needed water till the evening.

2: Baya: The Baya is a token of love from the mothers-in-law who are fasting for their son. It generally includes Money, clothes, jewelry, cosmetics, sindoor, and sweets. While receiving the baya, the women start dressing up in bright clothes and started to apply mehndi on their feet and hands. It symbolizes married Indian women in the culture. If the women are newly married then at her first karwachauth the gifts are been given from the boy’s end. This can include jewelry, clothes, or money.

3: The puja and narration of the story: In the evening, the women get together at someone’s house and begin with a puja. The area of the puja is beautifully decorated with the gorgeous idol of Maa Parvati. A few hours before the moon rises the traditional story of Karwachauth is narrated to all the married women.

4: Breaking of the fast: When the moon rises in the sky then it’s time to break the fast. Women started to light the diyas and pour water into the karwa container. Placing sieve on the traditional thali, the women go to the terrace so that they can see the moon.
Firstly, they view the moon through a sieve then water is offered to the moon. After that, they look at their husband through the same sieve. Then a prayer is said for their husbands and asks for his long life. Once doing all the things the husbands break their wife fast by feeding them with food and makes her drink a sip of water.

What Does Karwachauth Mean?

The word Karwachauth has a specific meaning. The word Karwa means the earthen pot whereas the word Chauth means fourth. So the whole term Karwachauth is about offering Arghya to the moon. It comes in the Hindu month of Kartik. The Karwachauth is observed on the fourth day of Krishna Paksha. This festival is mostly celebrated in the North and North-Western parts of India. It is mainly celebrated in Punjab, Rajasthan, Haryana, Gujarat, and Uttar Pradesh.

Karwa Chauth is mainly celebrated by Hindu women and married Sikh. They fast for the long lives of their husbands. The idea behind celebrating this festival is to wish and pray for the longevity and wellness of their husband. This festival beautifully celebrates the relationship between the husband and wife.
In today’s time, many of the men have started doing fastening and participate in the rituals. This has become a way of expressing love for their wives and has been influenced by the western concept of equality. But any way seems nice to see a man fastening for their wives.

Also Read: Things to do During Diwali Celebration That Will Reveal Your Taste