Why do we celebrate Dussehra Vijayadashami? Newspiner
Skip to content

Why do we Celebrate Dussehra? 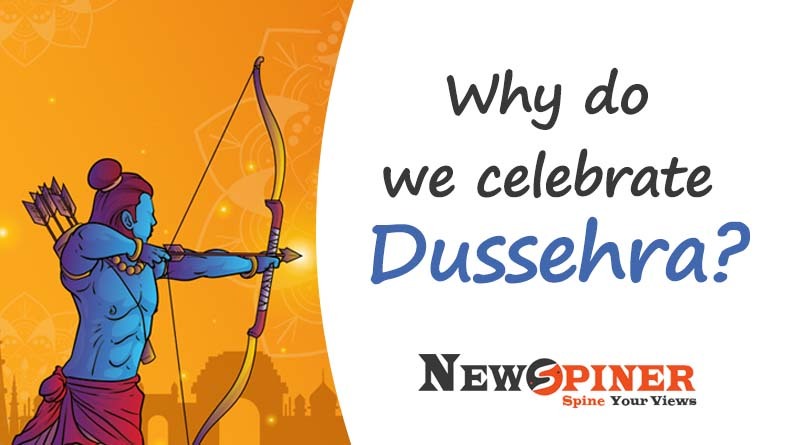 The festival Dussehra or Vijayadashami are been celebrated every 25th of October. It marks the victory of good over the bad. As every festival have its importance and some history behind it.

Vijayadashmi is also known as Dussehra and is one of the major Hindu festivals. It is celebrated across all India and at the end of Navratri every year. It is observed on the tenth day in the month of Kartik as per the Hindu calendar.

This festival is known by different names in various parts of the country. It is usually celebrated in a unique way everywhere. In the south, east, and northeast India, it is called Durga Puja and remembers the goddess Durga’s victory over the demon.

It is a path that goddess Durga took to protect Dharma. On the other end, in the northern and western states, the festival is known as Dussehra. In these regions, it marks the end of Ramila and celebrates Lord Rama’s victory over the demon king Ravana. Thus, it was a glorious victory of good over evil. The Festival Dusshera signifies the homecoming of Rama, Lakshman, and Sita.

The Dussehra festival has its kind of importance in Hindu Culture. On this day the end of immorality gets destroyed by the good. The people celebrate the day as a remembrance of a new beginning. It signifies the establishment of new and freshness in society and makes you free from the negativity and evil side that reside in you.

The Dussehra liberates us from the present-day evils and makes us more personified in the form of human behavior. As per the Hindu scriptures, it is believed that on this day the Maa Durga Puja or some other Durga blesses us from all the negative and malefic forces.

Why Dussehra is celebrated or Why Do We Celebrate Dussehra?

Dussehra or Vijayadasami brings joy and happiness to every kid’s face. While watching Ramlila, Ravan Dahan puts a smile on everyone’s face. In this article, we are going to tell how we celebrate Dussehra.

The day usually brings success and wins the victory. Moreover, it is a cultural festival with great importance and has great significance for all the Hindus. This day follows all the “Nine days of Navratri”. Similarly, you can also read about how we can celebrate the festival Holi in our next section of the blog.

The festival of Dussehra is usually celebrated to acknowledge the victory of good over the bad. The celebration of Dussehra begins from the very first day of Navratri and it continued till the end of the tenth day. On its tenth day, the actors dressed up as Ram and Laxman and started acting on the final moments of the fight battle.

They started shooting flaming arrows with giant energy of ten-headed Ravan, his brother Kumbhkaran and the son Meghnad. All these are placed in open grounds where the crowds gather and witness the act of destroying the evil. Thus, it is followed by excessive fireworks.

Dussehra is being an important Hindu festival and it is celebrated with great joy and enthusiasm. The people can celebrate this festival at home along with their family. Here are some tips on how you can celebrate Dussehra at home:

Some Rituals of Dussehra:

This festival is celebrated differently across all the states of India. In most of northern and western India, the day is celebrated in honor of Lord Rama. On this prosperous day the Drama, Dance, and Musical plays are held in Ramlila. This day describes the Ramcharitmanas and is been performed usually at fairs.

In Northern India, the Dussehra is being celebrated by burning the dummies of Ravan. This day is celebrated the twenty days before Diwali. On this occasion, all the rituals of Ram Lila take place everywhere. The music and dance revolve around the tales of Ramayana and many devotees perform these rituals and make the Dussehra more notable.

In Kolkata, the day is commutated with Upholding Durga Puja. And in southern India, the nine days of Navratri are being observed with the displays of Gods and dolls called Golu. On this day sweets are also prepared on the occasion of Dusshera to remark the festival day.

The Dussehra celebration in India is a spectacle to behold. It is celebrated in different ways in the country. But the core of them lies the essence of celebrating the good over bad.

Different people in different countries have different ways to celebrate Dussehra. But what remains the same across all these traditions is their ethnicity and vibrancy. All the nine days of Navratri commemorate the killing of the devil Ravan by Goddess Durga. And the Tenth day of Vijayadashmi marks the destruction of demon Ravan by Lord Rama.