7 Easy Yoga For A Healthy Life
Skip to content

7 Easy Yoga For A Healthy Life 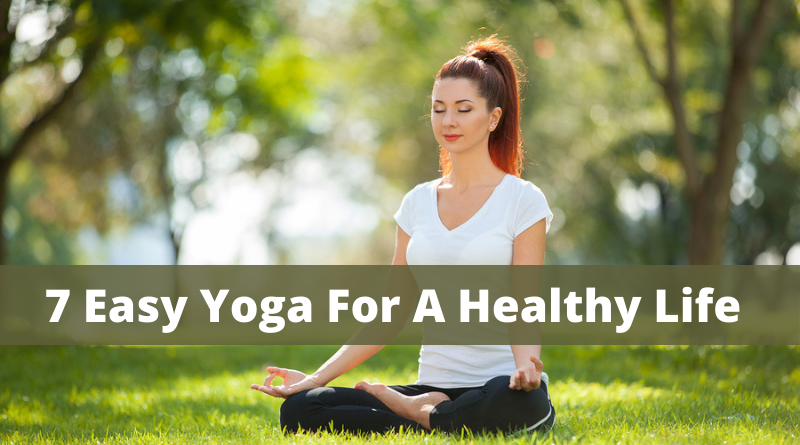 Yoga for a healthy life- Through the gym, we look strong from the outside. But it does not strengthen our inner nerves, muscles, and veins. Inner firmness comes only by heating in the yoga fire.

Like filling water in a raw earthen pot, the pot gets destroyed by melting. By cooking it and filling it with water, it does not melt again and water does not come out. Similarly, the body of the living being is deteriorating day by day. The firmness of the body is done only by yoga. Therefore, to strengthen the body, regular yoga should be practiced.

How beneficial is yoga for a healthy life?

Let us now know some such yogas with the help of which you can lead a healthy life and remain healthy.

Important yoga for a healthy life.

What I am going to tell you is to lead a healthy life, it is very easy to do. By doing this one can attain health as well as divinity.

Take water after cooling it through the mouth and remove it from the nostrils, this is called Chillakram Kapalbhati. By practicing this, the body becomes beautiful like Cupid and the yogi is saved from old age. The body becomes healthy and Kapha-doshas are destroyed.

By spreading both the feet on the earth with a simple gesture like a punishment, hold the toes of both the feet with care and keep the head on both the thighs. This is called Paschimottasana. A person who wants a healthy life and accomplishments must practice it.

In other texts, it is also called Ugrasana –

That is, by spreading both the feet separately, holding both the thumbs firmly with the hands, and keeping the head on the thighs, the fire is lit. The laziness of the body is destroyed. No disease touches those who practice it. His wind blows in the west, all accomplishments are achieved.

By drawing air through the tongue, fill the stomach with air. Then hold the air with Kumbhak yoga for some time and remove it from both the nostrils. It is called Sheetali. Sadhak should perform this ritual. By its means, all the diseases arising from indigestion, phlegm, and bile are destroyed and a person leads a healthy life.

Like a blacksmith fills the air with a blower. In the same way, by filling the air in the stomach through the nostrils, slowly move it into the stomach. By doing Kumbhak like this twenty times, hold the air. Then, as air comes out of the blacksmith’s bellows, in the same way, remove the air from the nostrils. This is called Bhastrika Kumbhak. In the same way, do it three times as per its rule, it does not cause any kind of disease. Health increases day by day and man remains healthy and fit.

At midnight, when the sound of any living being is not heard, then the yogi should go to such a place and close both the ears with his hands and perform the ritual of ‘Puraka-Kumbhaka’. By doing this man hears different types of words. The food eaten by this is also digested quickly. The body is healthy and man remains healthy. By doing this regularly, this mudra is proved. When this is proved, Samadhi is proved.

How does yoga change your life?

Yoga establishes a deep connection between your body and mind. It not only heals your body but also calms the mind. So that you can lead a happy life. Problems like anger, stress and depression go away. Any type of physical or mental problem can be cured by yoga. A person becomes the master of his own body. Just as a circus animal acts at the behest of its master, so the body of a yogi works according to his mind.

There is no doubt about these 7 easy yogas mentioned above, by which a person can lead a healthy life. And the most important thing is that it is very useful for those who are beginners. My goal is this, as long as every person in the world is healthy, yoga should be an integral part of your life. How did you like this article, do tell in the comment box. Any other questions you can feel free to ask me. Thank you.

If you want to keep your body healthy as well as willing to learn different types of yoga then you can learn Yoga School in Rishikesh, India.